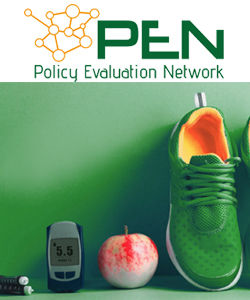 Last week from October 5-9th, the JPI HDHL funded Policy Evaluation Network (PEN) held their virtual midterm General Assembly to report on their intermediate results and latest developments. Besides several partners of the network that consists of 28 institutes in 7 European countries and New Zealand also members of the PEN Scientific Advisory Board and the Joint Call Secretariat were present to learn and discuss about the progress of the project.

PEN understands itself as an open network that still extends and seeks collaboration with other important initiatives in the field of health policy development, implementation and evaluation. An important collaboration has already been established with the two EU-funded Horizon 2020 projects CO-CREATE and STOP whose coordinators Inge-Knut Klepp and Franco Sassi have been present as well. Both projects complement the work of PEN and thus give an important opportunity to make use of the synergies which has already started with some joint symposia of the three projects on relevant international congresses.

Currently, an overarching working group is about to finalize a PEN specific glossary including nearly 100 terms being frequently used in the field of health policy evaluation to ensure a consistent use of terminology within the project. As a next step an interactive framework integrating and describing these terms will be published on the website.

Another successful milestone was the publication of the PEN EU policy indicator catalogue. The catalogue documents the data currently available for policy evaluation in Europe and contains a list of 72 diet-related indicators and 66 physical activity and sedentary behaviour indicators. The set of key indicators was agreed by over 30 EU experts including partners of PEN and can be accessed by anyone on the PEN website after answering a short impact survey interrogating about the visitor’s organisation and interest in policy evaluation indicators.

The network also used the occasion of their intermediate General Assembly to launch their Early Career Network (ECN) that has been set-up by the early career researchers themselves within PEN with the support of the coordination team. The ECN aims to implement several measures to promote the professional careers and exchange between younger scientists like a mentoring program, research visits as well as dedicated training workshops and webinars.

At the end of the midterm General Assembly the members of the Scientific Advisory Board acknowledged the project progress and provided some recommendations how to enlarge the dissemination activities of PEN to further strengthen the impact of the project by translating their results specifically to policy makers and the general public.