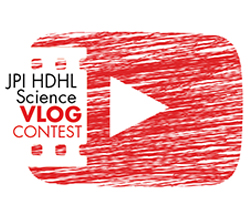 JPI HDHL Science Vlog Contest: and the winner is…

As part of the JPI HDHL conference, a science vlog (video log) contest for early career scientists was organised. From 14 running projects funded by JPI HDHL, we received a vlog made by one or more early career scientists.The best 3 vlogs selected by a review panel were shown during the conference and the audience could vote to select the winning one. The vlog of the GUTMOM project made by Lea Brix came out as the winner of the contest!

JPI HDHL science vlog contest
Those who work in the field of food, nutrition and health all agree that research in this area is of high importance. However, science alone is not enough to change the world. Broad and understandable communication of research projects in order to have an impact on society is essential for excellent science. JPI HDHL stimulates the communication of research projects beyond the scientific field and the “JPI HDHL science-vlog contest” contributes to this.

Vlogs
For most early career scientists who participated, this was the first vlog they made. Nevertheless, the results were of high quality and very creative. Together with EUFIC and DG Santé, both member organisations of our Stakeholder Advisory Board, the JPI HDHL reviewed the 14 vlogs that were made and selected the best 3:

These vlogs were shown during the plenary session of the JPI HDHL conference. Afterwards the audience voted for the vlog that they thought was the best. They were asked to take into account innovation, creativity, clear science communication and the explanation of the societal impact of the project. The vlog of GUTMOM from Lea Brix presented a clear, accessible and entertaining explanation of science for a broad audience and won the contest. Her prize was a vlog package including a microphone and tripod to support her in the development of more science vlogs.

Curious about the research projects that have been funded by the JPI HDHL and the creativity of the early career scientists? All the vlogs that were entered can be viewed on the JPI HDHL YouTube channel.